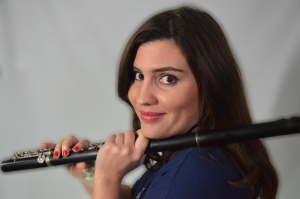 When in first grade, Corina sang in her school’s choir, which was lead by a volunteer. The following year she asked her parents if she could study music. Upon hearing a CD by master flutist Altamiro Carrilho she decided she wanted to play flute, and specifically, o choro. If you are familiar with Choro das Três, you know that decision was to change the course of not only her own life, but that of her whole family.

She studied classical music at the Conservatory in Tatui but her main proving ground was found in countless rodas de choro in Sao Paulo. There she, her sisters and father were welcomed by great masters of the genre and introduced to the repertoire, rhythms, charm and vocabulary of this fascinating music in it’s most natural setting.

At 15 Corina was awarded a prize offered by the Petrobras Cultural Program when, along with her teacher, she presented a project to recover the work of one of Pixinguinha’s most important musical partners, the flutist Benedito Lacerda. The prize enabled them to publish a box of 4 CDs of Lacerda’s work which would have otherwise continued to be largely unknown to the public.

Corina’s family band, Choro das Três was officialy formed in 2002, when she was only 14 years old. Since then she has produced, recorded, mixed and mastered 9 CD’s with the group. They have toured and taught extensively in Brazil, France, Mexico, Canada, Italy, Portugal…and of course, the USA, where Choro das Três has introduced choro to countless North Americans and built a fan base the old-fashioned way: town by town, gig by gig. She looks forward to settling in one place for a few days this summer—to play this music she loves, with you.