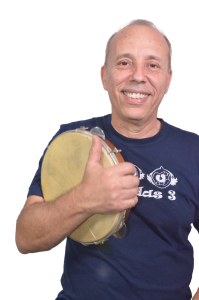 Eduardo Roque da Silva Ferreira started to play music when he was 15. In high school he took part in several presentations in São Paulo, even won some awards offered at various festivals. Still, until 2001, he remained a talented hobbyist.

Until, that is, his own talented daughters became impassioned by the music they heard and the masters they met at rodas de choro in São Paulo. Read the profiles of any of them—Corina, Lia or Elisa—here on this site and two things are bound to jump out. First, what an extraordinary learning environment these rodas provides the then girls, now women. And second, what extraordinary parents Eduardo and his wife Cristina were to have supported their daughters as they did—essentially building the family’s entire schedule around the girls’ interest in and talent for music.

As luck and genetics would have it, Eduardo shares that same interest and talent. So, in addition to being family chauffer, he too availed himself of the opportunity offered at those long afternoons stretching into nights at weekly rodas de choro in São Paulo. He came to focus on pandeiro, learning from Gentil, Zequinha, Tigrão, Valdir…people that have been part of Regional do Evandro, Isaias e seus Chorões—bands that used to play with Jacob do Bandolim, Altamiro Carrilho and other soloists when they would perform in São Paulo.

As his daughters’ youthful interest in music has become a career as Choro das Três, so has it for Eduardo as well. He’ll be working closely with Valério Xavier to provide you the same opportunity he himself enjoyed at those rodas in Sao Paulo—expert instruction, generously offered in a relaxed environment.