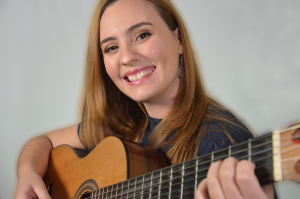 Lia Ferreira Meyer joins us as a member of Choro das Três in which she plays the challenging and essential role assigned the 7-string guitarist. She and Henrique Neto will work with guitarists at Choro Camp New England (however many strings you bring) to tackle that role as well.

Lia started studying music some 20 years ago, age 8, at the municipal school of the family’s hometown in what they call the interior (which translates roughly as, the “boonies”) of the state of São Paulo.  After studying the recorder for one year she switched to guitar.  She did study classical music at the Conservatory of Tatui but, truth be told, what really sparked her interest in the instrument were the many informal rodas de choro she and her sisters attended over the years. There she had the opportunity to play with mestres such as Luizinho 7 Cordas and Ed Gagliardi. They passed along not only their knowledge, but their passion for choro and the 7-string guitar. She’ll do the same for you.