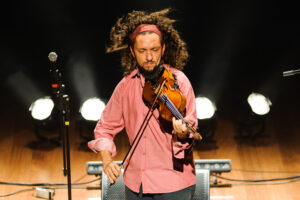 Ricardo Herz has created a unique approach to the violin that melds traditional Brazilian genres—choro, samba and MPB—with jazz improvisation, world music and the sounds of traditional forró instruments such as accordion and rabeca. His studies of violin have taken him from the University of São Paulo to the Berklee College of Music in Boston and finally to Paris, where he spent 9 years, playing with musicians from all over Europe and North Africa and studying improvisation with the great jazz violinist Didier Lockwood.

Ricardo returned to Brazil in 2010, and has performed or recorded with Yamandú Costa, Dominguinhos, Nelson Ayres, Proveta, the Symphony Jazz Orchestra, the João Pessoa Symphony Orchestra and the Jundiaí Municipal Orchestra, among others. He has played and given workshops in major festivals and venues around the world, having traveled to Malaysia, Mexico, Israel, Denmark, South America and the Caribbean. He has also recently launched the first online method of Brazilian violin.