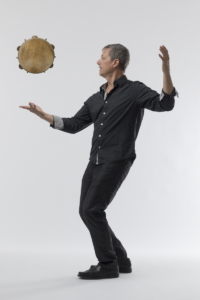 Brian Rice teaches Brazilian music at UC Berkeley and the California Jazz Conservatory and teaches the Samba Bateria and Afro-Cuban Ensemble at UC Davis. Since its inception in 1997 Brian has been on the scene at the California Brazil Camp as a dance accompanist and instructor. He taught choro pandeiro at the Centrum choro workshop in Port Townsend in 2007, 2009 and 2010 with Mike Marshall, Choro Famoso and members of Trio Brasileiro.

Since he was first introduced to pandeiro in 1986, Brian’s obsession with the instrument has led him to study with Guello, Marcos Suzano, Airto, Sergio Krakowski, Claudio Bueno and Clarice Magalhaes. He has performed with numerous Brazilian artists, including Rogerio Souza, Jovino Santos Neto, Paulo Sergio Santos, Danilo Brito, Dudu Maia, Almir Cortes, Hamilton de Holanda, Edinho Gerber, Ze Barbero, and Jorge Alabe. In 2017 Brian was invited to tour with the Danilo Brito Quintet performing at the Lincoln Center, Kennedy Center and Savannah Music Festival and for NPR’s Tiny Desk Concerts. File under, “nice work if you can get it.”

Brian performs with the Berkeley Choro Ensemble and, with Jane Lenoir, co-founded the Berkeley Festival of Choro which is now in its seventh year. The Berkeley Choro Ensemble released its first CD “The View From Here’ in the fall of 2017, presenting choros by modern composers, including several original compositions. In 2019 Brian formed the choro trio, Tres Baias with Almir Cortes and Nando Duarte. The group recently released their first self-titled CD. Here’s a sampling of them at work and play: