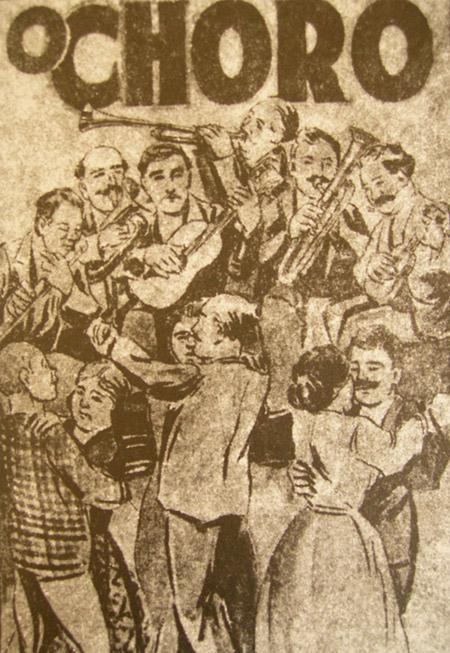 The musical genre of “choro,” also known as “chorinho,” began to take shape in mid-19th century Rio de Janeiro, where the music of the Portuguese court – ballroom dances such as the polca, waltz and schottisch met that of Afro-Brazilians. A similar process took place 5,000 miles to the north, where African-American skills and sensibilities combined with European music – especially that of military bands – to bring forth first ragtime, then jazz. And just as ragtime and jazz are universally regarded as prototypically American, so too is choro recognized as uniquely, exquisitely Brazilian.

Here’s a contemporary recording of a composition by flutist and composer Joaquim Callado (1848 – 1880) who was not only one of the most popular musicians of that time, but one in whose work we can clearly hear choro emerging as a distinct genre. Any European court musician would have been comfortable with the harmony and melody of this delicate piece, “Izabel,” had they seen it in writing. But upon hearing the percussion and syncopation of this performance, well, they and the dancers would have been scandalized and quite at a loss. And, historically, they were – until choro became all the rage!

An ensemble devoted to playing choro is refered to as a conjunto or a regional. Callado’s own conjunto, Choro Carioca, was made up of two guitars, a cavaquinho and flute. Nowadays one of those guitars would likely have 7 strings so it could better fulfill the role of bass. The cavaquinho is perhaps most easily described to North Americans as a steel-stringed ukulele. It typically provides accompaniment, often highly syncopated, at the other (the very high) end of the frequency spectrum. You see one second from the right in the photo below of the Regional de Benedito Lacerda. And quick, what’s that instrument to the far left in the same photo? North Americans will be forgiven if they respond, “a tambourine, of course!” Wrong, but not too far off. It’s the percussion instrument most commonly used to accompany choro, the pandeiro. 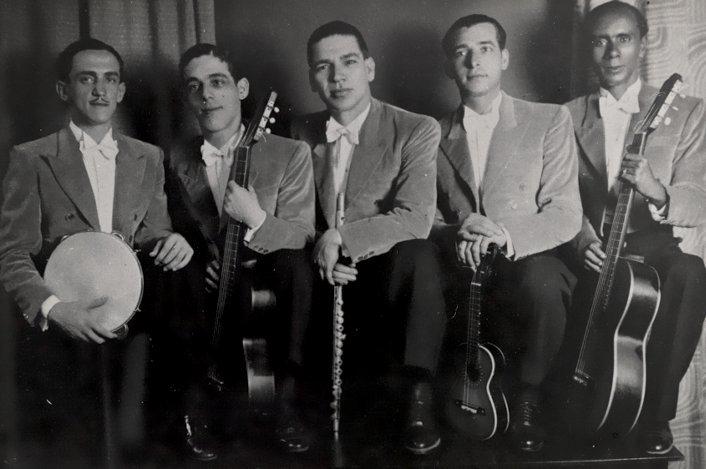 Together, these instruments constitute what’s called the “centro” of a conjunto. You don’t need to be fluent in Portuguese to understand, then, the centrality of the accompanists to this genre. Without their intricate, idiomatic contribution, the music may be lovely, but it’s not choro.

In this next video you have all three instruments mentioned above – 7-string guitar, cavaquinho and pandeiro – providing accompaniment for flute and accordion on a well-known choro, “Ainda me recordo” (“I Still Remember”). The tune was composed by two giants of 20th century Brazilian popular music, one of whom you see in the center of the photo above, the flautista Benedito Lacerda. The other, Alfredo da Rocha Viana Filho, known to all as Pixinguinha, (pronounced, peesh-ing-geen-ya) deserves more space than this brief intro can afford. One hint of his stature: his birthday anniversary, April 23rd, now serves as Brazil’s National Day of Choro. Any fan of the genre will be hearing a lot of him; any student of the genre will have to reckon with his virtuosity and genius.

Another instrument widely associated with choro is the Brazilian version of the mandolin, the bandolim. Brazil has produced some great virtuosi on this instrument, including Luperce Miranda, Jacob do Bandolim and today’s Hamilton de Holanda. The second of these was born Jacob Pick Bittencourt on Valentine’s Day, 1918. That he came to be known as “Jacob do Bandolim” is both a testament to his close association with the instrument and a not-uncommon convention among chorões, as musicians who play choro are known. In the photo above of the Regional de Benedito Lacerda, for example, the pandeiro player was known as “Popeye do Pandeiro;” the 7-string guitarist went by “Dino 7 Cordas” – Dino 7-String.

Jacob do Bandolim was influential as a player, a researcher and archivist, an arranger, and as a composer. Many of his arrangements and compositions are now standards of the genre. Here’s one such composition performed by Jacob with the backing of a conjunto regional he formed in 1964 and that went on to become legendary in its own right, Época de Ouro ( The Golden Age). This bluesy tune, Assanhado, makes easy listening for North American ears and may give newcomers a sense of the stylistic variety that can be included under the generous umbrella of “choro.”

One last point to mention in this brief introduction to the genre concerns the social aspect of choro. Not unlike, say, American jazz and bluegrass, choro invites and even tests one’s virtuosity as an instrumentalist. Examples abound in all these genres of musicians who redefine the impossible from 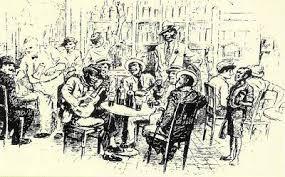 album to album, decade to decade. Such artists are thrilling and inspiring, but these same genres will (and occasionally do) wither and struggle to survive when they fail, not at the crown, but at the roots. And the roots of choro are to be found in the informal gathering of musicians playing in a local cafe, park or backyard for the sheer pleasure of great music made in good company. Kin of the bluegrass “jam” and the Irish music “session,” such a gathering is called a roda de choro – literally, a “choro circle.”

Most of us will never be able to match the tempos, the inventiveness, the subtlety or genius of the greatest chorões who’ve ever lived. But even those of us with only a modest ability as musicians can enjoy an immodest capacity for the joy and camaraderie to be experienced by shared music-making. That capacity is only expanded when the music itself has been crafted by minds and hands more skillful than our own for just that purpose: to lead us out, together, into our own neighborhood to play. If that’s an enticing goal for you, Choro Camp New England is here to serve it.